Czech "antennae" bus driver Roman Smetana has now been charged with "avoiding prison". He can be sentenced to three years

Roman Smetana, a former driver of public transport buses in Olomouc, who is currently serving a 100 day prison sentence for drawing with felt tips on Czech political election posters, has now been charged with a new offence. On Wednesday 5th December, new charges were raised against him by Kateřina Paulová, a prosecutor from the state prosecutor's office in the Moravian city of Olomouc.

In mid-January 2013, Roman Smetana will be tried at the Olomouc district court for "obstructing an official decision", namely for failing to report to prison to serve his prison sentence.

Roman Smetana started serving his sentence in April 2012, but he was prematurely released when an appeal was lodged to the Czech Supreme Court. After the Supreme Court had rejected the appeal, Smetana was ordered to go back to prison to serve the remainder of his 100-day sentence on 8th October, 2012. He, however, did not report to prison until 16th October 2012. Before he gave himself up on 16th October 2012, he confronted, in front of the media, the Czech Prime Minister Petr Nečas in his election headquarters in Prague during regional elections on Saturday 13th October asking him whether he thought that his prosecution was fair. Petr Nečas replied that everyone has to follow the orders issued by the courts, adding that if it were up to him he would not have prosecuted Mr. Smetana because his prosecution had, in his view, damaged the reputation of the ruling conservative party (ODS).

Mr. Smetana is alleged to have committed the offence of "obstructing an official decision" also in March 2012. He was supposed to report to prison at the end of March, but he did not give himself up until a large trade union anti-government demonstration at the end of April 2012, during which he also came to the attention of the Czech media.

According to Prosecutor Paulová, it is possible that both charges will be dealt with by the same court at once.

Roman Smetana was sentenced to a prison sentence because he refused to carry out public works to which he had been sentenced by Judge Markéta Langerová, the wife of Czech conservative politician Ivan Langer, whose election poster he defaced. Mr. Smetana drew antennae on the heads of the politicians depicted on election posters before the May 2010 general election. His action has drawn considerable nationwide support in a country which is highly dissatisfied with the ruling politicians. Many other Czech citizens have demonstratively drawn antennae on the heads of politicians featured on billboards. Two leading film makers, Vít Klusák and Filip Remunda, have made a documentary about the persecution of Mr. Smetana.

Smetana's supporters have asked the Czech President Václav Klaus to pardon Roman Smetana, but the president has refused to do so.

Roman Smetana can now be sentenced to up to three years in prison. 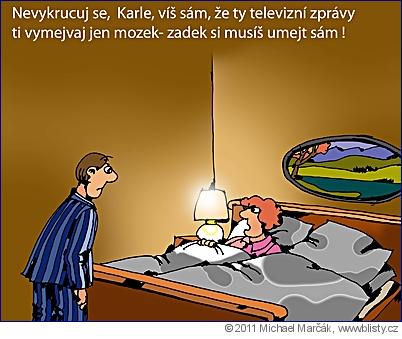