American reflections concerning Russia, which have largely been imported to the Czech Republic by the "mainstream" on the one hand and by"alternative media" for the purpose of mass consumption on the other, largely belong to one of two extreme poles. Either they are an "idealistic" continuation of cold war politics to contain communism, or, conversely, a quasi-dissident "realistic" revisionism, which simply turns the cold war scheme upside down. But this shift within an equation, invalid from the beginning, is not exactly a reliable way to get to the truth. It is a general and in its origin fully derivative and dependent manner of always changing one's opinion and opposing oneself, the result of which, in the end, is the same fatal infatuation as the one you wanted to get rid of.

What today is referred to as "neo-Wilsonism" and what largely influences the apparatus of the State Department and much of the media is a continuation of old neo-conservatism within the environment of the American Democratic Party. Susan Rice, Victoria Nuland and their admirers and parrots, and in practical politics notably Secretary of State John Kerry, represent this incarnation of American messianism. They above persions lack any doubt about the fact that the US only does good everywhere in the world to such an extent, that they do not realise at all where the limits of American influence are, and that it is rapidly weakening and suffers from a total absence of legitimacy. It does not occur to them in the slightest how much damage the US has done with arbitrary interventions abroad after the official end of the cold war. If John Kerry now cavils at Moscow that its invasion of Crimea is a return to the 19th century, it is probably some totally different person than the one who voted for the illegal invasion of Iraq in October 2002. The immature process of expension of NATO, which stands in absolute opposition to promises made at the end of the Cold War, has never been a subject of critical reflection. The absolute lack of self-reflection is simply an endemic feature of the aforementioned subspecies of the American ideologue. According to him all evil comes exclusively from lack of American leadership in the world and from insufficient American involvement. After all, if the US would try harder with their exceptionality, they could suppress all evil in the world. Let us compare this subspecies to a greyhound: the head is simply not the dominant element of its body and it runs a lot faster than it thinks.

The "realists" on the left and on the right behave exactly the opposite way, so as to distinguish themselves as much as possible from the former. Authors like New York University professor Stephen Cohen, The Nation columnist Chris Hayes, the conservative columnists of The National Interest Jacob Heilbrunn or David Rieff as well as the strange paleo-conservative webpage Traditional Right, which is currently decorated by a photomontage that depicts Putin crossing a ford on the back of a saddled bear, recite a long litany about how hypocritical and pernicious American foreign policy is and how propaganda lies about its supposedly moral motives. To a large part this is actually true, but with the by-product going as far as masochistically compensating self-reflection, in the end it is nothing more than another idealization and infatuation derivable either from a overly one-sided introspective orientation or mere laziness of thought. American hegemonism and the policy of containment are rejected in favour of the assumption that Putin's Russia is a traditional conservative power, which only tries to preserve the status quo and does not have any expansionist intentions. At the same time they ignore all evidence that Russia actually promotes a "conservative revolution" in the international order in the form of the Eurasian Union project. Yet, so many times alleged experts on Russia have ignored and underestimated the project, which cannot be implemented by conservative policy but solely with an expansion to "the near abroad." The second type of ideologue most probably looks like a French bulldog: It has a large head but cannot run very well and, as Jaroslav Hašek noted somewhere, constantly falls onto its snout due to its imbalanced physical constitution.

Over the last few weeks the columnist Timothy Snyder has published a number of critical texts about the impact of extreme political tendencies on Russian foreign policy and the events in Ukraine. They are activist texts and it is quite obvious which side the author stands on, however, that alone does not make them scrap paper. In December, Snyder published an article titled "A Way Out for Ukraine" in the New York Review of Books, and in February another one in The New York Times called "Don't Let Putin Grab Ukraine". Aside from many other claims one may or may not agree with, both texts include a warning of a Russian invasion of the Ukraine after the Olympics. In his text "Distorting Russia" from February 11, Stephen Cohen accuses Snyder of raising the issue of the threat of a Russian armed intervention without any evidence. Today is March 3 and Cohen's text has just been published in the printed version of The Nation. However, in the meantime the whole world already knows which one of the two - Snyder or Cohen- was right concerning the invasion.

Those who live in the blissful illusion as to the real motivation of the Kremlin's political elite always repeat that they want more evidence for their otherwise entirely obvious intentions just where, first and foremost, they should be studying their mentality and long-term ideological influences. For example, vulgarised and idealised geopolitics -- which is a form of "esoteric instruction for how to use power" among Siloviks (a Russian politician from the old security or military services, often the KGB, FSB, and military officers or other security services, who came into power during the 1990s or 2000s) in the post-Soviet era, virtually replaced the previous Marxism-Leninism. Russia is an undemocratic country and the exclusive elite is largely influenced by "Rasputinian" types operating behind the scenes; there, they have an even greater influence than in the West, while the opinion of ordinary Russians practically has next to no political weight at all. It is often the case that whoever requests the above-mentioned "evidence" about the intentions of the Russian elite simply shows absolute incompetence in judging the Kremlin's future aims, just like the aforesaid Cohen. And if it is shown beyond doubt that he was wrong, instead of re-evaluating his own incorrect assumptions he demands more and more evidence from the opposition. Nothing new there. The Mechanisms of immunisation with ideology against empirical testing have already been described by Popper.

Europeans are not US citizens and hence do not have to pass through the joys of a post-imperial hangover together with them, during which one fatal ideological blind spot replaces another. Incidentally, US foreign policy criticism plays an entirely different role in the Czech public discourse than in the United States. The US will not whip the Czechs into "their own ranks" with this criticism because Europe, where they live, is and never will be the United States of America. Additionally, in these turbulent times Europe has much more important things to worry about than the outgoing Uncle Sam's ritual slapping. It has to find its bearings in a rapidly changing international situation.

The fading of American influence in the world and the certainty that the weakening West cannot actually pluck up the courage to any effective counteraction led Putin to exploit a unique window of opportunity and an expansion to "the near abroad." And this endeavour is by no means just about Crimea or even the Ukraine. It is about the restoration of the Russian Empire and, at the same time, an attempt to reach a strategic agreement with Germany at the expense of the states that find themselves in the unfortunate space between the two giants.

The Americans have no way of helping Central Europe with this fate; neither militarily, nor theoretically.

(Translated from the Czech by Julia Secklehner) 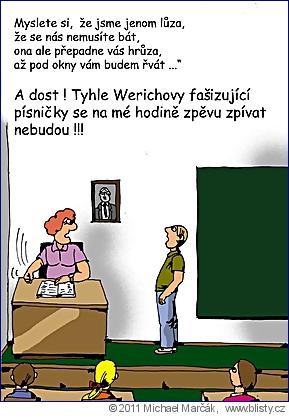