On 17th November, the day of 26th anniversary of the democratic revolution in Czechoslovakia which brought about the fall of the authoritarian communist regime in that country, a Prague gallery banned an exhibition of "anti-state" caricatures of Czech politicians.

Caricatures of Czech politicians by the graphic artist Petr Jedlička were taken down from the walls of the "Literary Café" in Týnská Street in Prague for being subversive. The caricatures made fun of the vanity of the former Czech prezident Václav Klaus, depicted the oligarch Andrej Babiš who holds the post of Finance Secretary and Deputy PM, as a scarecrow and criticised the nationalism of Czech President Miloš Zeman, pointing out his financial connections to the Russian oil company Lukoil. The Literary Café in Týnská Street is operated by the municipal institution Galerie hlavního města Prahy (Prague Galleries). The manager of The Literary Café Zdeněk Cibulka says that the decision to take down the pictures from the walls of the Literary Café was "correct". 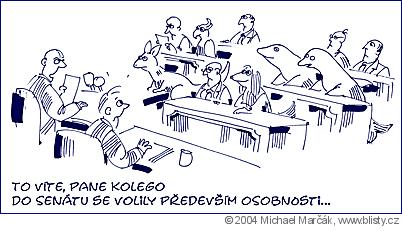