On Saturday, Czech President Miloš Zeman will address the conference of the extreme right wing party SPD (the Party of Direct Democracy), which has won 22 seats in the 200-seat Czech parliament in the recent Czech general election. Zeman and Tomio Okamura, the SPD leader, share many of their views. They are both strongly against allowing immigrants to enter the Czech Republic and they want to introduce frequent referenda into the Czech political system.  Zeman has recently said that SPD is not an extremist party: "SPD supports direct democracy, so it cannot be an extremist party."

SPD will say at the conference on Saturday whom they will support in the Czech presidential elections which will take place in January 2018. Zeman is standing for re-election. A candidate that they will endorse must support direct democracy, must be against islam, must reject immigrants and must defend our own interests, not the interest of Brussels, said Okamura. These are all views held by Zeman.

In mid-December, the SPD party will hold in Prague an international meeting of eurosceptic and extreme right wing politicians from western Europe. The meeting will be attended by Marine Le Pen, the leader of the French National Fron, and the Dutch anti-muslim politician Geert Wilders.

Tomio Okamura's views are presented in this video (English subtitles): 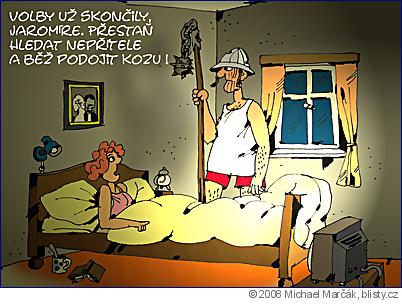