For any war to make sense, each side must have a vision of what victory would look like. For the Allies in World War II, victory was the total and humiliating defeat of Nazi Germany and the Axis countries. For Ukraine, however, there is little hope of any triumphant Victory. Of all the scenarios that might develop in this wildly unpredictable and tragic conflict, none will be good for Ukraine. For one thing this is not a conventional war. It is conventional only in the wretched way that thousands of soldiers, rebels, and civilians are losing their homes and lives. But it is unconventional insofar as it is never entirely clear if this is a civil war, fought between the Kyiv centre and radical separatists in the east, or an international war between Ukraine and Russia.

President Putin's has been trying to convince the world that this is a purely civil war. At the same time President Poroshenko's task has been to pitch this exclusively as an international conflict. Alas, neither of these positions is entirely true. Appalling as each of these scenarios would be (civil war or international war), they would at least allow us to imagine what victory would look like. Instead, Ukraine is mired in a conflict that is as opaque as it is tragic. Consequently, the major arenas of this war have not only been territorial and strategic, but also propagandist.

Nowhere are these battles more evident than in the humanitarian convoy currently camped at the Ukraine-Russia border. While over 200 trucks (many, admittedly only half full) wait for clearance to provide much-needed humanitarian support to the besieged and increasingly desperate civilian population of Luhansk, reports come in of Russian Armoured Personnel Carriers and other military vehicles that continue to penetrate the Ukrainian border.

A key question, though, is how the population of south-east Ukraine interpret Russia's actions. Do these trucks represent the face of `brotherly' Russia ready to provide food and water where the Kyiv authorities have only brought death and destruction? Is Russia's convert military support seen as necessary to stave off the `fascist' onslaught of the Kyiv `Junta'?

At present it is impossible to know what the residents (many now fled to Russia or other cities in Ukraine) really think. Sociological surveys from before the conflict showed reasonably high levels of support for remaining part of Ukraine, either within current constitutional arrangements, or with added federalisation or decentralisation. However, the bombarding of civilian areas by notoriously inaccurate grad missiles may have changed people's minds. While the Ukrainian military denies its use of such weapons in civilian areas, Russian media has been quick to lay the blame squarely on the shoulders of Kyiv.

In this respect, the truth is far less important than the perception. Unfortunately for Kyiv and for President Poroshenko, the shambolic state of Ukraine's military, inherited from years of corruption and neglect under Viktor Yanukovych, mean that he is forced to rely on volunteer battalions of Ukrainian `patriots'. Some of these battalions, such as the Azov Battalion, are comprised of nationalists with openly neo-Nazi viewpoints. The rationale behind using these battalions is clear. If Kyiv wishes to defeat the armed separatists (many of whom are from Russia) then it has no choice. There will certainly be no military assistance from NATO. Victory, therefore, can only be achieved by harnessing the energies, patriotism, and hatred of the young volunteers of Ukraine.

But what victory will this be? In the best case scenario for Ukraine, the rebels will finally be surrounded and defeated, and the currently porous border with Russia will be secured. While this is a distinct possibility, it will, of course, depend upon the reaction of President Putin. If, instead of allowing a steady stream of military vehicles to enter Ukraine, Russia decides to mount an open invasion, then it is difficult to see how this conflict will ever end.

But, assuming that Kyiv does, finally, rout the separatists, how much of a victory would this be? In this scenario there should be no wild celebrations and no dancing in the streets because the conflict would be far from over. Peace will undoubtedly be welcomed by the vast majority of the inhabitants of Donetsk and Luhansk regions, but Ukraine may never recover.

For one thing, defeat of the rebels would not indicate total defeat for Russia. In this scenario, Russia would have no one to provide covert military assistance to. It could, however, continue the battle for (to use the American phrase) `hearts and minds'. Most people in south-east Ukraine are native Russian speakers. This does not mean that they are pro-Russian, pro-Putin, or pro-separatist. It does mean, however, that many of them continue to consume Russian news and media.

They are also in a region that has long historical, cultural, and (perhaps most importantly) economic ties with Russia. Vladimir Putin has openly referred to the region as Novorossia (New Russia), a term used in the 18th and 19th century Tsarist Russia. From Russia's perspective there is still hope that people in the Donbass will start to think of themselves as `New Russians' instead of Ukrainians. Certainly, much will depend upon the actions of the Kyiv government.

Alarmingly, the authorities in Kyiv continue to provide ammunition for Russian propaganda. As part of the government's efforts to maintain security and the territorial integrity of Ukraine, for example, the Communist Party of Ukraine has recently been ousted from parliament. Communist leader, Petro Simonenko had the audacity to declare that Ukraine should withdraw its troops from the civilian areas of Donetsk and Luhansk where it was waging `war against the people'.

Clearly, the message is that respect for the individual lives of the in south-east Ukraine should come secondary to the existence and survival of the Ukrainian state. Many people will have sympathy with this view. But for the people whose homes are being shelled, this may well be interpreted as inhumane, and as evidence that these people really are as barbaric as Russia TV claims. This reflects the short-sightedness of Ukraine's current leaders. They are obsessed with the material and military victory over the terrorists in the east. In such turbulent times this is entirely understandable, but they need to be careful. Military victory will come at a high cost. It will cost millions of dollars in economic disruption. More tragically it will cost the lives of thousands of soldiers and civilians. Ultimately though, it may not seem like a victory at all. If a determined Russia and a fatigued and angry civilian population blame Kyiv for the turmoil, then this will be a hollow and fragile victory.

Putin understands this very well. It was why he not only amassed thousands of troops at the Ukrainian border, but also sent his 280-truck convoy of humanitarian aid. In the long-term it might well be the humanitarian angle, and not tanks, that defeats Ukraine. 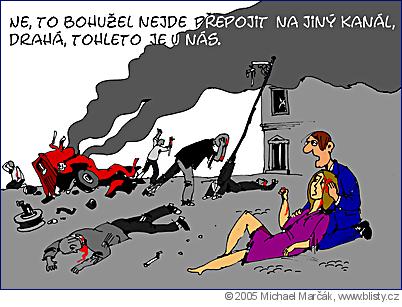